After researching MBA programs with a healthcare focus, Dr. Brian Torcato WG’13 came to Wharton to get the business skills needed to start a company.

When Dr. Brian Torcato, WG’13, came to Wharton’s MBA Program for Executives, he was looking to take his medical career in a new direction. A practicing pediatrician and medical director at public health centers in Philadelphia, his goal was to make a bigger impact.

“As a practicing physician, doctors manage one patient at a time. I wanted to learn how to multiply my impact on a much larger scale to reach parents and children with autism across the world,” he said. “I also wanted to build something related to autism since I’m an autism parent and I’ve seen the effects of the disorder first hand. I wasn’t sure exactly what the venture would look like, but I felt that an MBA would give me the business skills I needed to start a company.”

After researching several EMBA programs, including ones focusing on healthcare, he decided that Wharton’s EMBA program was the best fit. “If you want to do something then you should reach as high as you can to achieve as much as possible. I also wanted to gain a holistic understanding of business to start a company rather than focus on medicine,” he said.

However, the admissions process wasn’t smooth sailing for Brian, who hadn’t used the math on the GMAT in decades. After months of studying – and taking the test twice – he felt he had a competitive score. “It showed that a lot of hard work pays off,” he said.

That proved true in his first year at Wharton as well. “I had an established career with a lot of responsibility and am an autism parent, too. I soon realized that this program is just as rigorous and time-consuming as they say it is. It took me a while to find some balance and it was through sheer effort and determination that I succeeded.”

He also credits his learning team for helping him through the first year. “I didn’t have a business background so everything was new from the language to the finance and accounting concepts, but I learned a lot from classmates as we worked together on projects.”

Learning How to Make a Bigger Impact

As a student, Brian became energized about building his own company. Focusing on autism, he explains that there is a critical need to shorten the time-to-diagnosis for autism worldwide, as an early diagnosis can lead to better short- and long-term outcomes.

“The current medical system fails developmentally disabled children. If you suspect your child isn’t developing properly, there is often a year-long wait to see an autism specialist. There is a mismatch of supply and demand,” he said. Long waits for care can have a detrimental long-term effect on patients.

Brian’s idea was to remove those barriers to care by developing a methodology to diagnose autism via telemedicine. The initial business plan for The Autism Telemedicine Co. involved developing a methodology to utilize existing gold standard tests for autism to make the diagnosis and lower barriers related to access, distance, and institutional voids.

Over time, Brian decided to pivot and build an online portal of resources. “We moved away from the telemedicine concept to create a platform called BrainKind that can host available tests for parents all over the world. It’s a fee-for-service model, where parents buy the test and we send them a report with an explanation. We’ve expanded the number of tests available and are currently rebranding the company.”

Brian says that his Wharton MBA is providing crucial value in building the company from key business knowledge to the network. “Many of my classmates are also starting their own businesses and we call each other for support and to bounce ideas off each other.”

Prof. Ethan Mollick has been a great resource for Brian, too. “I took his entrepreneurship course and met with him during office hours to discuss my ideas. Entrepreneurship is a very meandering path, so you start out with one idea and then may go in other directions.”

Perhaps the biggest benefit of all is the sense of unlimited potential. “We often hold ourselves back thinking we aren’t good enough or a project is too big. But after going through this transformational program, we know that we have the ability to reach upwards and achieve great things.” 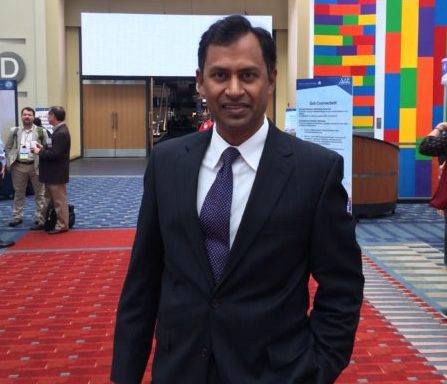 Prior Education
University of Mumbai, Medicine; Royal Colleges of Physicians of the United Kingdom, Drexel University of College of Medicine, Residency