“We only have a year left,” says Antonia Singleton, WG’18. “Either you’re going to grow the relationships you’ve made or you’re going to try get to know more people. I want to create a platform for people to do that — bring their own story.”

It took Antonia Singleton 60 seconds to start telling her story. It was a 60 Second Lecture, to be precise — a speech during Wharton Pre-term when she challenged her peers to give back to Wharton and the greater Philadelphia community and leave this community better than they found it.

Sharing stories became a driving theme of Antonia’s first year in the Wharton MBA program, from casual conversations to student panels to story slams sponsored by the Storytellers Club.

“At Wharton I feel like I never need to set a different tone or pretend to be someone other than who I am,” she said. “People know I was raised in Harlem, New York, a lot of them know I’m a former teacher and I’ve worked at Goldman Sachs. This is my story that I share with them. People are open and often intrigued by it.”

Antonia’s openness to life at Wharton and sharing her experience is part of the reason she was elected Cluster 4 President. Hers isn’t always an easy story to tell, from speaking about her mother’s unresponsive medical condition after a cardiac arrest shortly before Antonia arrived at Wharton (which led to her mother’s passing in March), to sharing the grief of the loss of a Wharton learning teammate in November, to talking about her experiences as an African American woman in the context of Black Lives Matter.

“At Wharton I’ve been able to tell my story, and now people see me as a connector and a resource. Usually asking questions and learning about individuals is what I do,” she said. “When I’m coming into a new space, I know I’m not the most knowledgeable. I ask a ton of questions. And if I’m learning something new from someone, I’m also trying to help them however I can. It’s reciprocal. I tell people that once you have me in your organization, I’m going to give back. I am going to reinvest and share everything I have learned whenever and wherever possible.”

From Education to Goldman Sachs and Back to Education

The first of her family to attend a four-year college, Antonia discovered a passion for teaching when she began tutoring inner city students from Ithaca High School and Southside Community Center in Ithaca as an undergraduate at Cornell University.

“Where I come from in Harlem, I was able to graduate from high school and go to Cornell, not just because of my parents, but because of my teachers,” she said. “They treated me as their own and reminded me about all of the opportunities and possibilities available to me outside of our bubble, far greater than I could ever imagine. Once I saw how much they poured into me and pushed me, I realized that it was my responsibility to the same for someone else.”

During the summer before her senior year of college, Antonia interned with Teach for America (TFA) on their Institute Management team in the Mississippi Delta, a region with some of the highest needs for education. She loved it. After graduation she followed her passion and joined the TFA corps in Atlanta.

Between her first and second years as a teacher, Antonia had the opportunity to work her first for-profit job at Goldman Sachs through a TFA summer internship partnership program for first-year TFA corps members of color. She was one of 18 teachers selected globally to participate in the 2011 pilot year. Because Antonia knew she didn’t want to be a banker, she worked in operations to gain a skill set she could apply anywhere.

After her summer internship on Wall Street and just before she kicked off her second year of teaching, Antonia received a full-time offer from Goldman Sachs. Excited but torn, Antonia knew choosing between staying in her classroom or returning home to work in financial services was not going to be an easy decision.

“I asked my mom, ‘Should I go after this? I’m an educator and I love it.’ She said no one in the family had ever worked anywhere like Goldman Sachs,” Antonia said. “I realized that if I was ever going to try the for-profit world, there would be no other chance.”

When she got to Goldman, she found a completely different world from her Atlanta classroom, but she discovered all kinds of synchronicities and connections with her life.

Antonia found opportunities to give back by volunteering and serving as a Goldman Sachs Ambassador to these same nonprofit organizations throughout her time at the firm.

Back to Wharton and School

When Antonia’s need to return to education resurfaced, she came to Wharton.

“I wanted an MBA to provide me with the network and resources to marry my passion in education with my skillset in operations and project management,” she said. “Wharton has everything I want in an MBA program. I even get to take classes at Penn’s Graduate School of Education, which is one of the top three graduate schools of education in the nation. So I’m not just taking advantage of the courses at Wharton, but of the entire Penn community as well.”

“I call it reaching back and pulling forward,” Antonia said. “I share my story and what I struggled with, in addition to some best practices for dealing with them. Maybe that’s the educator in me, I always look out for those who are journeying through experiences that were once new to me.”

Elected Cluster 4 president at the beginning of her first year (and the first African American in the role), Antonia was also honored with the first annual Benjamin Schüttler Award for Perseverance and Community Impact at the end of her first year. In memory of Benjamin, Antonia’s socially conscious teammate who had passed away, the award goes to the member of the class who consistently displays leadership amongst their peers through selflessness, impactful positivity, and responsible community citizenship in the face of adversity.

Eric Morin, Cluster 4 associate director for MBA Student Life, explained, “Antonia has so much passion, and she does such an incredible job of thinking about the big picture and beyond her own class or even her own time here at Wharton when she thinks about planning events, supporting students, or creating cluster and school affinity.”

This past summer Antonia interned as an educational consultant through Education Pioneers in the Denver cohort, working as the project manager of the Innovation School Action Zone within the Office of Autonomous Schools division of the Aurora Public Schools district in Colorado. It was challenging, high-stakes work.

“I’m working with principals and assistant principals to help lead innovative change within schools with the highest needs,” she said. “We’re in year two of implementation and year three of the school turnaround model. If these schools do not reach their target growth and performance levels within the next year or two, they run the risk of being shut down completely, which negatively impacts students, families, and overall communities.”

She was able to use many of the strategies she learned in her Wharton classes throughout her internship, citing Management 611: Managing the Established Enterprise and her Field Application Project with Verizon Wireless as particularly helpful.

“Even though I’m working in education, the things I’m doing involve changing and developing a well-established organization and communicating with several different audiences all at once,” she said. “The management teams aren’t always sure how to maximize the organizational effectiveness of their leadership teams and staff. They know the problems, but they struggle with prioritizing and implementing actionable steps to solve these problems. There is a high need of change management, strategy, and operations expertise in this space.”

Now that she’s headed back for her second year at Wharton, she has a more academic focus, planning to take more strategy classes, another Field Application Project, and negotiations to help her make a bigger impact as a leader in education.

“Before I had this internship, I didn’t have full insight into what was going on behind the scenes in our inner city K-12 public school districts — what the administrators talk about, what they worry about, what keeps them up at night,” she said. “Being here and sitting with these school leaders this past summer, I now have greater insight and know how in regards to what kind of experiences and skill set are required.”

Sharing Her Story as Cluster 4 President

Returning to Wharton as a second-year student leader is a different experience than when she stepped up to the mic at last year’s Pre-term. Her goal as Cluster 4 President is to help people have more purposeful and intentional interactions — for example, through small group dinners.

“We only have a year left,” she said. “Either you’re going to grow the relationships you’ve made or you’re going to try get to know more people. I want to create a platform for people to do that — bring their own story. By the time I graduate, I want to be able to say that I’ve put myself out there using my platform as a president to give people (including myself) an opportunity to learn about what we are most passionate about, what we’re most afraid of, what motivates us, and how we plan to change the world.”

Antonia says the culture and structure of the Wharton MBA program encourages students to share.

“At Wharton I’ve told my story way more than I ever have before,” she said. “My high school friends came to campus, and when they interacted with my Wharton friends, they said, ‘You’ve shared things with them that you just started getting comfortable sharing with us.’”

Her extraordinary circumstances were another part of it. “I did a Storyteller Slam about what my mom meant to me,” she said. “She’s the reason that you see me here today and not at home huddled in a corner. I’m here because of the promises I made to my mom and my family.”

“In every opportunity Wharton has extended to me, I’ve been able to grow, whether that’s in the classroom, or my internship, or my cluster,” Antonia continued. “If you ask anybody I’ve spoken to, they’ll tell you I love Wharton. I’ve had some of the greatest experiences here while going through the toughest aspects of my life. I’m so grateful for the people who are part of my Wharton experience and continue to push me to be a better person.” 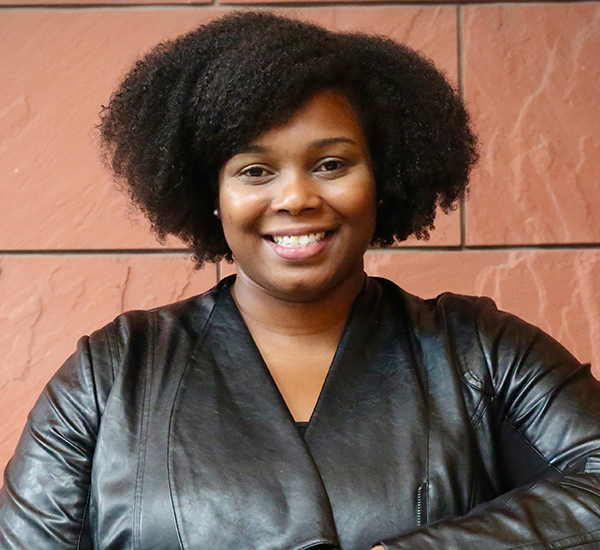