Without support, it can be scary to take risks in your life and career. For Kiersa Sanders, finding a community at Wharton made all the difference.

Once in a while, you meet someone who you can tell is destined to make a real impact on the world, no matter what obstacles stand in their way. Kiersa Sanders, WG’20, is one of those people.

It’s the reason she was named this year’s $25,000 Whitney M. Young Jr. Memorial Fellowship Scholar. And it’s why Kiersa’s hard work has translated into an impressive resume, which begins with her time in high school in South Seattle.

“Seattle was a really interesting place to grow up. South Seattle was one of the most diverse zip codes in the country in terms of languages spoken,” Kiersa said. “Some of my closest friends were Vietnamese, Laotian, Filipino, and Mexican. It’s just a really big melting pot of immigrants and I love that about it.”

Kiersa grew up in a single-parent household, the third of four siblings. Around 15, she decided to help out her family with a job at Team Read, a nonprofit focused on eliminating the reading achievement gap among elementary schools in low-income communities by pairing them with high school student tutors. (Kiersa would go on to become a lifelong supporter of Team Read, joining their Board of Directors and advocating for the nonprofit at Seattle Public School Board meetings.)

Kiersa was the first of her siblings to graduate high school, but after graduation, college wasn’t on her radar. She worked for a startup parking company as an operations manager, working 40 hours a week. After two years, though, her ideas about college began to change. Her professional interactions at the parking company and the encouragement of a friend led her to enroll at Seattle Central Community College when she was 21. For the following two years, she worked from 9 to 5 at the parking company and took classes at night, studying accounting. Paying for college herself was “brutal,” Kiersa said.

She got through it, though, and graduated with an associate’s degree. But the idea of getting her bachelor’s degree was starting to form in her mind. In 2011, she took the plunge, becoming a student in the University of Washington’s Foster School of Business.

While interning in Deloitte’s accounting department, and attending both Yale’s Global Pre-MBA Leadership Program and Harvard Business School’s Summer Venture in Management Program, Kiersa was exposed to consulting as a pathway to getting her MBA. She graduated from UW at the top of her class in 2014 with a job offer in Deloitte Consulting’s Strategy and Operations department.

She took it. She worked on mergers and acquisitions in the tech industry, traveling throughout the Bay Area and South Korea for three years, before getting serious about pursuing an MBA.

“I wanted the ability to get out of Seattle. I felt I had reached the max of how far I was going to go in the city. I realized that an MBA would allow me to lean into who I was meant to be,” she said.

Kiersa completed the MBA Prep Program through Management Leadership for Tomorrow (MLT) in 2017, which allowed her to get a broader view of the schools with MBA programs, including Wharton.

“I went to Explore Wharton, which is the event they have in September before you apply, where they have people of color come and talk,” Kiersa said. “I hadn’t really thought about Wharton, but that was the first time I realized I wanted to go to the school.”

It was also her first introduction to Wharton’s African American MBA Association, or AAMBAA, which supports the development and continued achievement of students of African descent at Wharton.

“I met members of AAMBAA on a visit to Wharton before I even applied. Everyone was super helpful and welcoming. It definitely felt like a family right away,” she said.

In 2018, Kiersa got the call from Wharton saying she was accepted to Wharton as a Class of 2020 as an MBA candidate.

“Getting the call from Wharton was one of the best feelings I’ve ever had. I was finally seeing my hard work come to fruition, and I couldn’t wait to move to Philly to join the community I met at Explore Wharton,” she said. “Joining AAMBAA was a no-brainer.”

The weekend before Pre-term her first year, she went on a weekend retreat the AAMBAA ‘100 Series’ chairs organize for members where students heard from Wharton alumni who spoke about the group’s history and legacy.

“I hadn’t heard of other schools that had this type of group for black students. It made the transition into Wharton much easier because felt like I already had a home base,” Kiersa said. “It was super easy to pour myself into the AAMBAA community because every day I’m just so thankful to be here.”

Inspired by her experience during that first year, Kiersa now serves as 100 Series Co-Chair, helping to organize four events supporting students throughout the year.

In addition to its extensive resources, AAMBAA exposed Kiersa to a wide professional network and business opportunities. It’s how she met her current business partner, Theresa Shropshire. The two quickly became friends over an interest in fitness – specifically, how to navigate strength training as women in gyms where the weight section is often occupied by men.

“Walking out into the weights area of a gym can be very intimidating. So, we decided to work out together,” she said. “When we went to the gym and started lifting, we had a lot of women come up to us and ask if they could work out with us. We thought that we should just create something to help women learn how to strength train.”

During her first year at Wharton, she was an intern at Vista Equity Group, a leading software private equity firm, and worked on growth strategy for a wellness-focused software company. So, Kiersa knew this idea could work.

Thus, a start-up was born. Temporary working title? Builtable. Elevator pitch? It’s like theSkimm, but for fitness and strength training.

“It’s a newsletter you get to your email inbox that’s really short and easy to read,” Kiersa said. “The type of content you can expect is exercises demonstrated in the form of short videos or gifs, new Instagram fitness accounts for you to follow, or a comparison of different resistance bands.”

Kiersa credits her association with AAMBAA and Wharton’s black community in helping her build confidence, and act on her desire to pursue entrepreneurship.

“My risk tolerance, before coming to Wharton was very low. But, having a community and feeling supported has been super helpful. Having all these incredible women around me through AAMBAA has been amazing,” she said.

Kiersa said she never would have imagined she’d be a Wharton student working on a start-up. 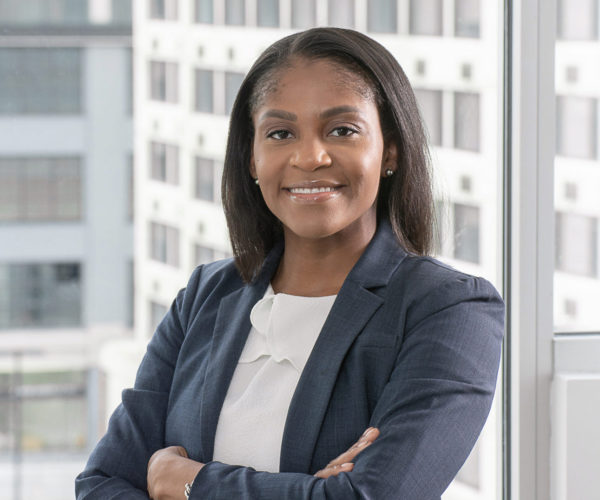 Here are some quotes from the many nominations Kiersa received to be the 2019 Whitney M. Young Jr. Memorial Fellowship Scholar, provided by Wharton’s MBA Admissions department.

The Whitney M. Young Memorial Fellowship provides an excellent opportunity to recognize members of the AAMBAA student body who have demonstrated an outstanding contribution and leadership to the community of color at Wharton, the University of Pennsylvania and the larger community. This recognition will culminate in a one-time $25,000 Fellowship Award to an outstanding second-year AAMBAA student, named the 2019 Whitney M. Young Memorial Fellowship Scholar. Nominees must be a member of AAMBAA and Wharton community who has demonstrated academic excellence and made outstanding contributions to the achievement of excellence by people of color in the Wharton, University of Pennsylvania and/or greater business communities.