Wharton Stories » How This MBA Student’s Passion for Policy, Finance, and Football Are All Related

How This MBA Student’s Passion for Policy, Finance, and Football Are All Related

“Even when you finish a degree, learning doesn’t stop. If you’re involved in the policy sphere or finance, you need to learn quickly and absorb a lot of information and synthesize things.”

For Jon Hartley, WG’17, the power of economic forces and how they are applied has been an ongoing passion. Before he came to Wharton for his MBA, his interests led him to the Federal Reserve, investment management, Jeb Bush’s 2016 Presidential campaign, and even the NFL as a statistical analyst.

“I’m interested in markets and trying to understand inefficiencies, whether that’s markets for football players or securities,” he said. “The same core tools are applicable across them all — basic statistics, correlations, optimization. It’s the same tool box.”

Jon was recently named one of Forbes’ “30 under 30” in law and policy. Forbes recognized Jon for co-founding Real Time Macroeconomics, an economic research project that scrapes online economic data on job openings, layoff announcements, and self-reported wages, to create economic indicators that forecast macro-trends in real time. He developed the metrics with his undergraduate college roommate Matt Olson, who is now a PhD student at Wharton and Jon’s roommate again in Philadelphia.

Wharton was Jon’s first choice when he decided he needed an MBA to close gaps in his financial knowledge. He had previously studied at the University of Chicago, which has a formidable graduate business school and economics department, but no finance major for undergraduates.

“I couldn’t take many finance classes as an undergrad,” he said. “And although Wharton has an incredible reputation for many other things, its finance faculty set it apart for me. I’m learning things here that I don’t think they’d be teaching anywhere else, or not to the same extent.”

“[Prof. Gyourko] knows more about housing markets than, I’m pretty sure, anyone in the world,” Jon said. “People like that are very, very rare — the top person in the world in their discipline. He knows about every single metropolitan area in the United States and its housing markets. It’s incredibly impressive — not just Joe but the majority of my finance professors. They’ve really lived up to the school’s reputation.”

Jon has even been a TA for the same class twice — Capital Markets, with sections taught by Prof. Krista Schwarz and Prof. David Musto.

“It’s been a real treat to get involved with Wharton Finance Department,” he said. “When you’re a TA you get a great opportunity to relearn everything in the class. Helping other people better understand how finance works helps me understand. Some students come in with little to no finance experience and you get to see how far they come. You have to get them up the steep part of the curve, and explaining it is how I go about mastering it.”

That’s why he spends a lot of time writing and speaking about finance and policy. Jon quoted Albert Einstein, who said, “If you can’t explain it simply, you don’t understand it well enough.”

Jon has been a contributing writer for Forbes and the Huffington Post, and also has also made appearances on Fox News, Fox Business, CNN, and NBC. He also was an economic policy adviser and surrogate for the Jeb Bush 2016 Presidential campaign, making TV appearances on behalf of the campaign, and co-authored op-eds with Columbia Business School Dean Glenn Hubbard, who was one of the Bush campaign’s senior economic advisers, and Jeb Bush Jr., who chaired the campaign’s youth outreach.

“Every day I’m thinking about public policy and how it impacts the economy. It’s a challenge to be able to articulate these things,” Jon said. “On TV you only have about 40 seconds, but I really enjoy writing. You can take as much time as you want with a particular subject. It’s a launching pad for ideas. Whenever I write a piece, I email it to a bunch of people in the economics, public policy, and finance spheres to get their take on things. Sometimes people will agree with you. Sometimes they’ll disagree with you. Sometimes they change my mind.”

At Wharton the MBA club he’s most active with is the Adam Smith Society.

“It’s a student group that brings in speakers covering all sorts of public policy and the powers of free markets,” he said. “We often have a counterbalancing opinion thinking about the role of markets. It’s a nice vehicle to get exposure to bigger policy scholars. We’re in Philadelphia and not in DC, but we can still bring in speakers and have wonderful events.”

After graduating, Jon is returning to New York in an investment management role, where he’s excited to apply what’s he’s learned and expand his knowledge.

“Even when you finish a degree, learning doesn’t stop,” he said. “If you’re involved in the policy sphere or finance, you need to learn quickly and absorb a lot of information and synthesize things.” 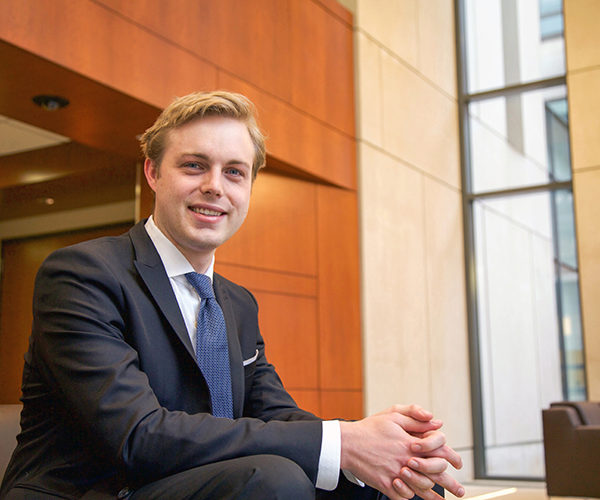 A Dallas Fan in Philadelphia

A lifelong Dallas Cowboys fan, Jon was formerly a part-time statistical analyst with the team, assisting with the development of analytics research aimed at improving player selection and in-game team performance.

“My biggest interests are finance, economic policy, and football analytics,” Jon said. “That seems disjointed, but I like football analytics because it’s almost like a laboratory in an isolated way to think about how markets work — how inefficiencies arise and can be exploited to build a better football team or win more games, like going for it on fourth down or trying for a two-point conversion, which I recently wrote a paper on, or how to trade down draft picks.”

When the 2017 NFL draft came to Philadelphia April 27-29, Jon braved the ire of Eagles fans to join the festivities on the parkway while wearing his favorite Cowboys jersey. He became a much bigger part of the event than he anticipated when he was pulled from the crowd to announce the Cowboy’s sixth-round pick. Watch the video